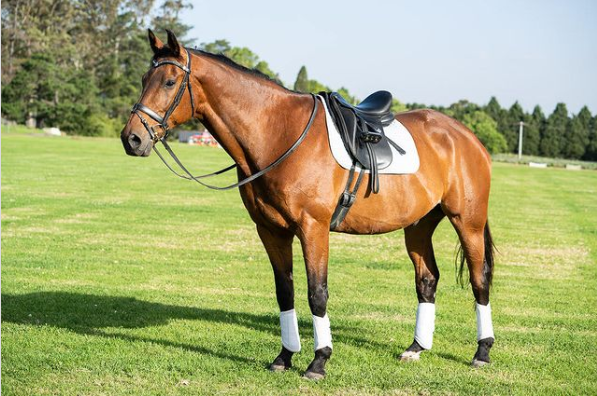 Harry is a big boned Hanoverian gelding with a big personality and lots of talent, but when I met Harry the 19 year old Harry in May of 2020, he was lame. Judy had purchased Harry knowing that he had ringbone, but she really liked Harry, and only wanted him for light dressage riding. Unfortunately, Harry had become mildly lame and Judy was hoping I could help him to come back into work.

My first impression of Harry was that he was quite weak behind, he had more muscle in his shoulders, than he did in his hindquarter. My first impression is always important in the assessment process as it tells me if the horse is functioning as a whole, or if some parts are not working, or working too hard.

As I continued with the initial assessment, I found Harry’s right front knee was very stiff and uncomfortable and I wondered if this was the cause of his lameness rather than the ringbone? He had some very tight overdeveloped muscles in his neck where he had been incorrectly using them to take the weight off his right fore. Continuing to the hindquarter I found he was uncomfortable around the highest point of his pelvis (the tuber sacrale), he had painful referral points indicating possible sacroiliac strain, and his pelvis was tilted forward. All of this would make it difficult for Harry to bring his hocks underneath him, drive from those hind legs, and take weight back onto the hindquarter.

I concluded that if we could get Harry using his hindquarter again, and take some weight off the forehand, we should be able to reduce the lameness. I have also found the AOE (Acupuncture Oriented Energy) therapy system is very good at releasing the blockages that cause lameness (from a traditional medicine point of view), so I quite optimistic. I explained to Judy that knowledge is power, and with the knowledge of Harry’s weaknesses we could release any tension and blockages while strengthening him where needed.

Third Session 9/07/20, Harry hasn’t been lame since the second session! He has been lightly ridden by Marlene Battedou using classical dressage principles and is happy in his work.

As I write this in November of 2020 Harry has been going from strength to strength, with Judy’s care and riding/instructing assistance from Marlene.

See a video of Marlene and Harry here