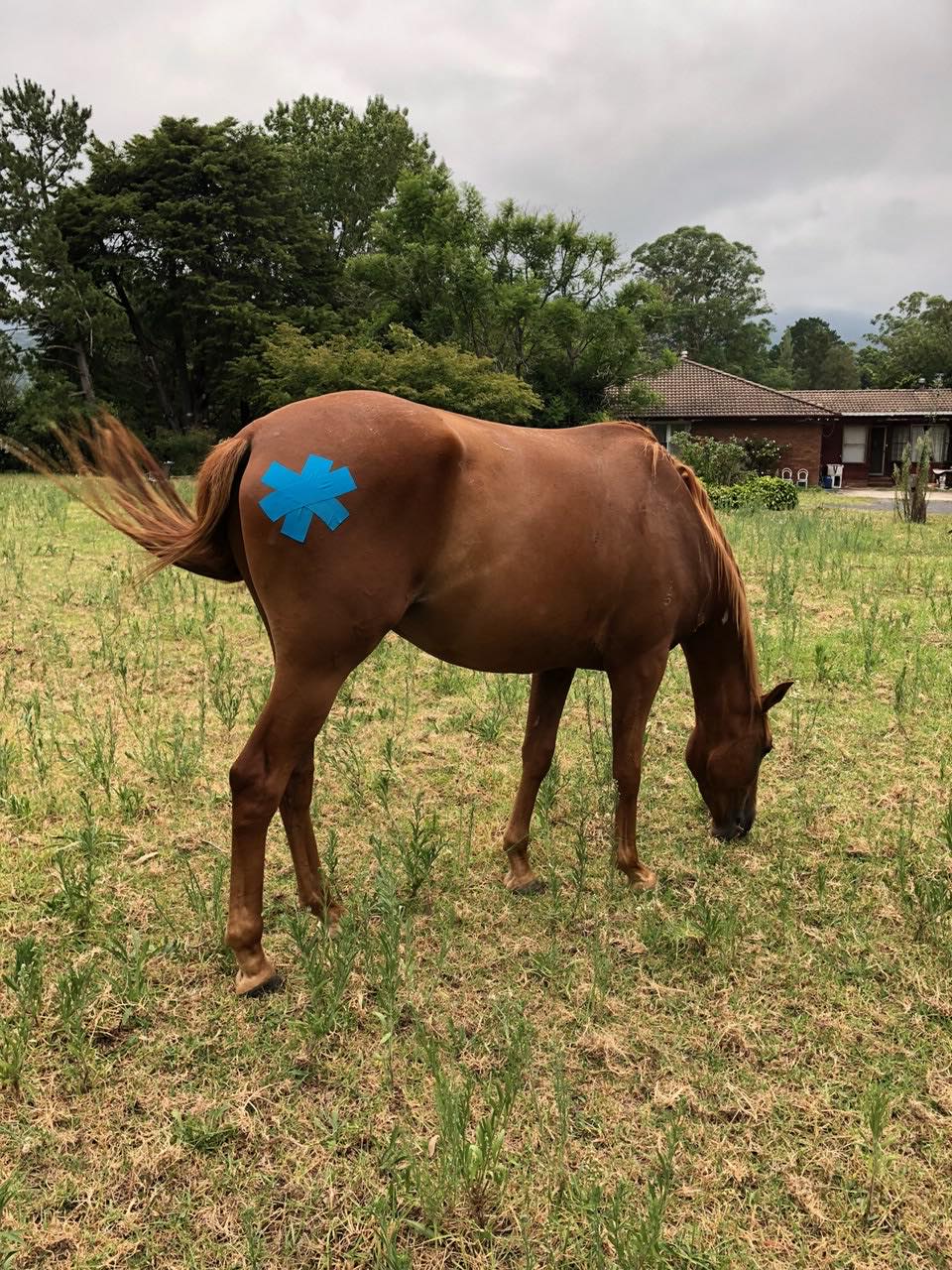 Laura was quite excited for me to meet Mercury, the gangly 3yo Australian Stock Horse gelding she had brought from a drought area. ‘He’s very sweet and very quiet’ she told me, ‘He’s a project horse, we will let him grow up, get him going, and find him a new home.’

I was immediately concerned when I met Mercury a few weeks later at a local showgrounds. He was turned loose in the round yard while I worked with their other horse, and Mercury was too quiet. After 35 years working with horses, and a lot of that spent with young horses, I just knew Mercury’s reactions and energy level were not right. For a 3 year old who was away from home, and in a strange place, Mercury was dull, he was not showing any interest in his new surroundings.

At the end of my usual thorough assessment process I was still concerned, this process included:

Mercury looked a bit uncoordinated, his responses were dull and his pelvis was unlevel. We discussed possible causes and I advised Laura she might need a veterinary opinion. After my next visit, without any improvement, Mercury saw our local equine specialist vet who diagnosed Mercury as having an old head and pelvic injury that was causing some ataxia (lack of balance). He gave Laura the ok for me to continue the treatment.

Laura moved Mercury to her Mum’s property which was flatter, so there was less chance of another fall, and there were less horses to push him around. Once he was there Irene asked me to come as often as I thought was needed to help Mercury recover. As the injury appeared old I wasn’t sure how much I could help, but I also now knew that Craniosacral Therapy was the best tool that I had in my training to help Mercury.

At the first session craniosacral session, when I placed my hands on his sacrum, Mercury immediately dropped his head lower and lower. He was clearly involved in the therapy. We all stood very still, with me focussing my thoughts, or intention, on releasing any blockages in Mercury’s nervous system and reconnecting his brain to his hind limbs. I think we stood together, Irene, Mercury and I, without moving, for around 45 minutes. I felt a sense of smoothness under my hands and a flow, and this is where I stopped the session. I then applied some Vetkin Tape over Mercury’s hips, again encouraging his body and brain to make connections.  Irene released Mercury who stayed with us for a while, then wandered off to have a big shake and start yawning, yawning and yawning!

The next session was a week later, and I arrived to find a very different looking Mercury, he was bright, alert and poking his nose into everything. He also looked more co-ordinated as Irene walked him around for me. I repeated the process but it was much quicker and I found myself also doing some fascial release around his pelvis.

The next session was 3 weeks from the first, and I arrived to find Irene being overwhelmed by a very cheeky and lively 3 year old, it was so exciting to see! Although a bit much for Irene!

After the 3rd session I declared the next step was for Mercury to start some rehabilitation exercises such as walking over poles etc. A year and a half later Mercury, a happy, healthy 4.5 year old was sold to a lady for trail riding. He is still in that home and has become a fantastic mountain trail horse.

Here is the story from Irene’s point of view: ‘Robyn has been looking after my horses for at least eight years that I can count, probably more. I can’t praise her highly enough, she is amazing. There are many stories I could tell but I think the best one is Mercury. Mercury is a young Australian stock horse we bought for my granddaughter to bring along. We always have Robyn treat our horses prior to working them. To uncover any discomfort we haven’t noticed. Robyn noticed a problem straight away and wanted the horse to be seen by a vet before treatment as the problem was severe and neurological. It turned out he had had had a flip injury when he was broken in ( a head injury)we did not know about. Under Robyns sole care , that horse has gone on to lead a very happy life in work! She is amazing!’