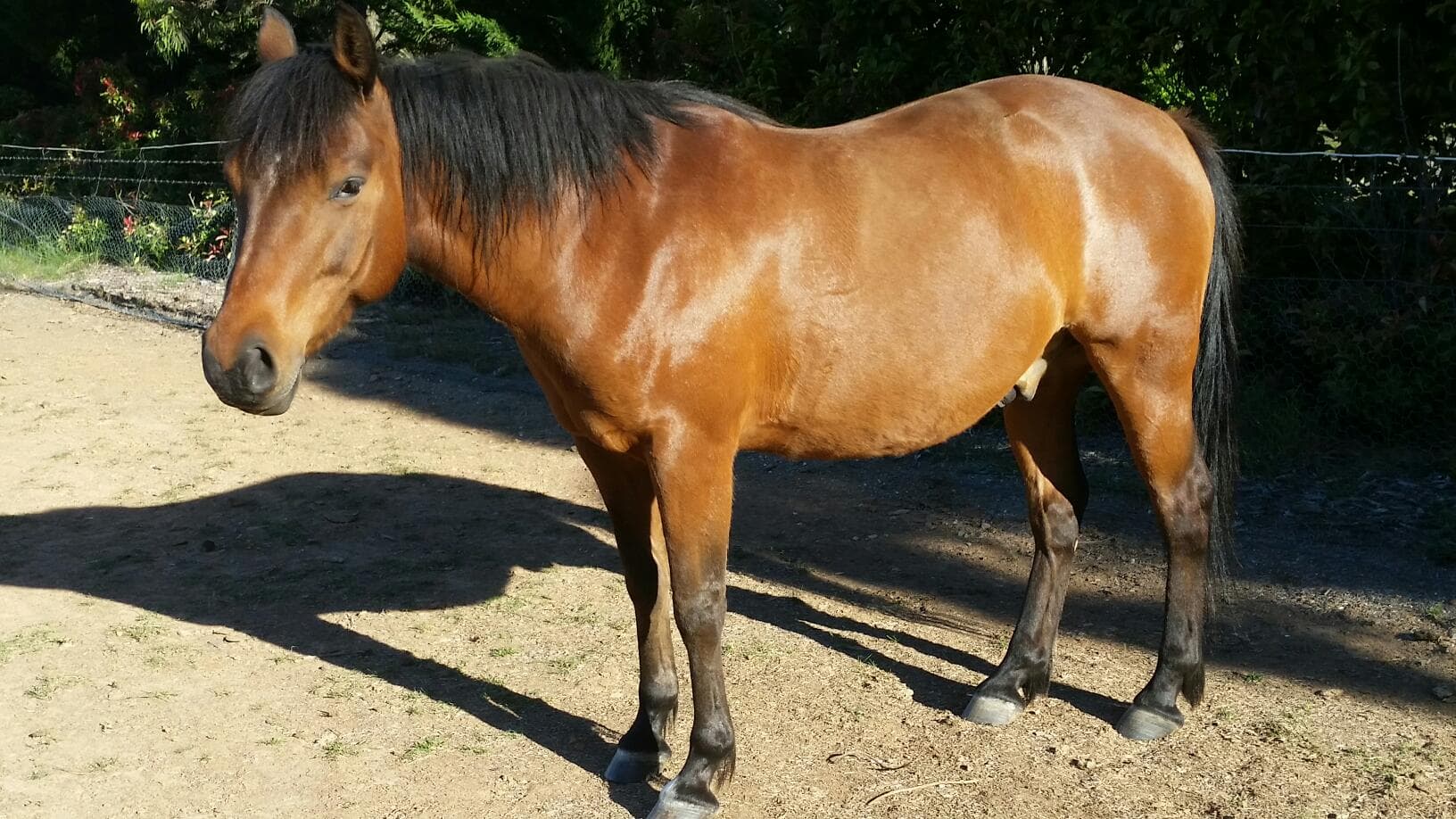 Rico was the second horse for Hazel’s young family, taking over the teaching from Shadow, a grand old man who had been there and done that and wasn’t bothered by too much. Rico was much younger, a sturdy little fellow who was to continue that journey started by Shadow. Unfortunately, Rico had his own ideas and his behaviour was a little worrying for the children so Hazel herself decided she had better step up and work with Rico, with the help of a trusted neighbour and horse trainer. The trainer soon noticed Rico had an ongoing lameness and he was diagnosed by the vet as having fractured his knees as a youngster, and although healed the knees were very stiff, arthritic and not ideal. The vet recommended Hazel give me a call to help come up with a plan of management.

From my notes at our first consult

Over the next 8 months I visited 6 times using a combination of Red Light Therapy, Fascial Release, Joint Mobilisation and Sure Foot Equine Stability System ®. Rico improved with each visit, and Hazel did her part introducing targeted carrot stretches and postural feeding. The lameness almost disappeared, Rico was happy to walk and trot, although not on circles, and they were slowly progressing to a happier, safer partnership. However, he still ‘waddled’ in front and clearly found some things quite tiring, or difficult and was reluctant to move forward, especially at the start of each session. His back was always tight in compensation for the lameness.

Then I learned the AOE (Acupuncture Oriented Energy) therapy system with Dr Christian Torp, and Rico was one of the first horses I wanted to practice on! I had a feeling that AOE might be the key to helping Rico with his painful joints. I asked Hazel if she would trust me to try this new technique, ‘Everything you have done so far has helped, so I trust you.’ Was her reply.

I assessed Rico as per normal and noted the range of motion, or bend in his knees, was only about 60% of what it should be, in other words when you picked up a front leg you couldn’t bend the foot up very far at all.

Then I applied AOE

I released 3 points in the AOE system and all of the tightness in Rico’s back had melted away, he looked to be standing more square and balanced in his body, his fascial expression had relaxed and he just Looked Different. Hazel walked and trotted Rico out again for me, and the Waddling in front was GONE!

I was so surprised, but a bigger shock was to come…I picked up Rico’s left front leg and the knee bent All the Way UP, just like a normal healthy leg! I was so shocked I dropped Rico’s leg, I felt as though I had broken something but I knew I couldn’t have done that, I had hardly used any pressure to pick up the foot and bend the knee. I then tested it again, and yes it was true, it had full range of motion, then I checked the other front leg and it was the same. Hazel and I were grinning at each other, ‘You didn’t expect that did you?’ she queried. ‘Nope,’ I replied, honest as I always am.

Hazel reported to me that after the session Rico was happily offering to trot, and even canter, something that was totally new in their relationship. It seems that much of his ‘stubborness’ was due to discomfort.

The AOE system is designed around 3 initial sessions and then a check up about 3 times a year. Rico completed his 3 sessions and has continued to be able to bend his knees fully, and move without waddling, Hazel is now happier and more confident in working with Rico, knowing that he is no longer in so much pain.